Construction of the Matthewson House is dated between 1870-1900 with several additions made in the 20th century. The floor plan is irregular for a Regional/Vernacular style home which provides evidence for expansion during prosperous times. Ornate architectural features such as the mantels, archways, door frames, kitchen cabinetry, and bay additions are present throughout the home. These features are not typical of this style of home. This illustrates an extremely prosperous and skilled family living within the home.

Oral history states that the original house was constructed by James and Eliza Matthewson, with the property being formerly known as the Emily Jones property. The earliest James and Eliza Matthewson have been located on the census living in Princeville is 1880. It is believed that the home passed to their daughter Eliza Matthewson, who in 1910 owned and operated a restaurant in Princeville. Eliza was the mother of James, Glennie, Ray, Martha, and Mary Matthewson. Ray and Glennie both served as long-term Mayors of Princeville. Martha and Mary also played important roles in education and community leadership. Deed records show that Martha Matthewson Baker (married Jesse Baker of Baker Funeral Home) was the last Matthewson family member to own the property. 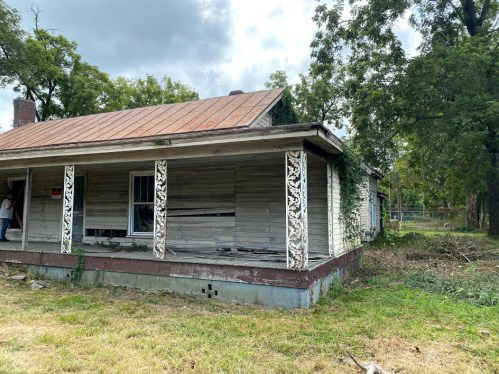 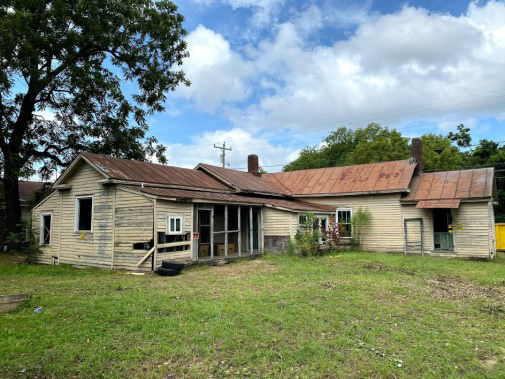 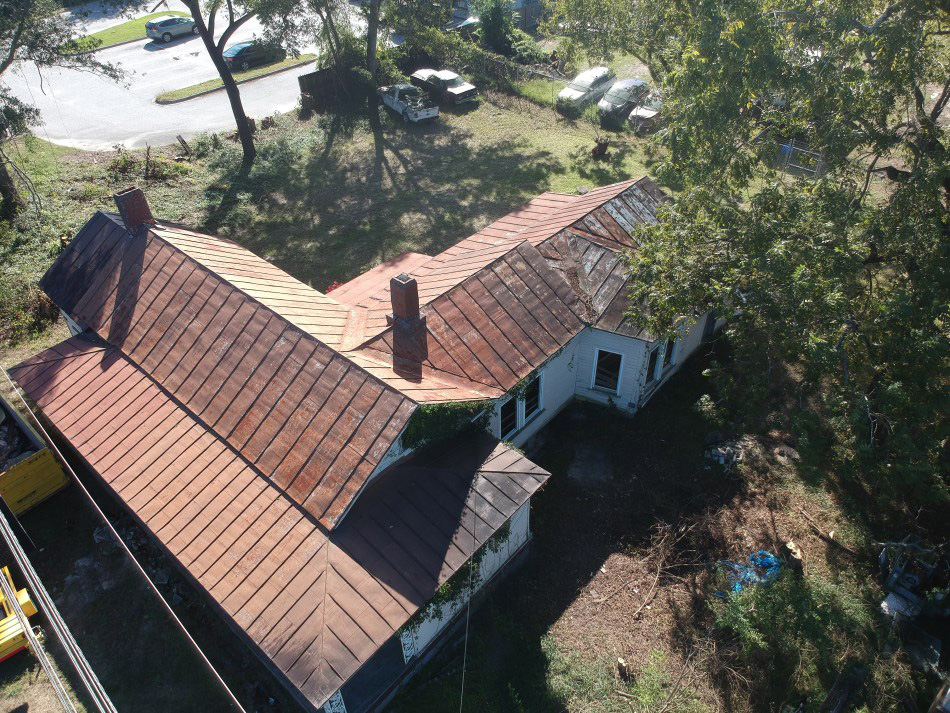 In 2019 a feasibility study was completed on the Matthewson House that evaluated the cost and options for elevation and relocation. The study concluded that the house was unable to be relocated or elevated. To save as much of the history of the Matthewson House as possible the Town of Princeville partnered with the private homeowner and local preservationists (Creative Salvage, Inc.) to extract architectural features from the house before it is demolished. These items will be preserved for future use in the Princeville Museum. Video and photographic documentation has occurred throughout the process. 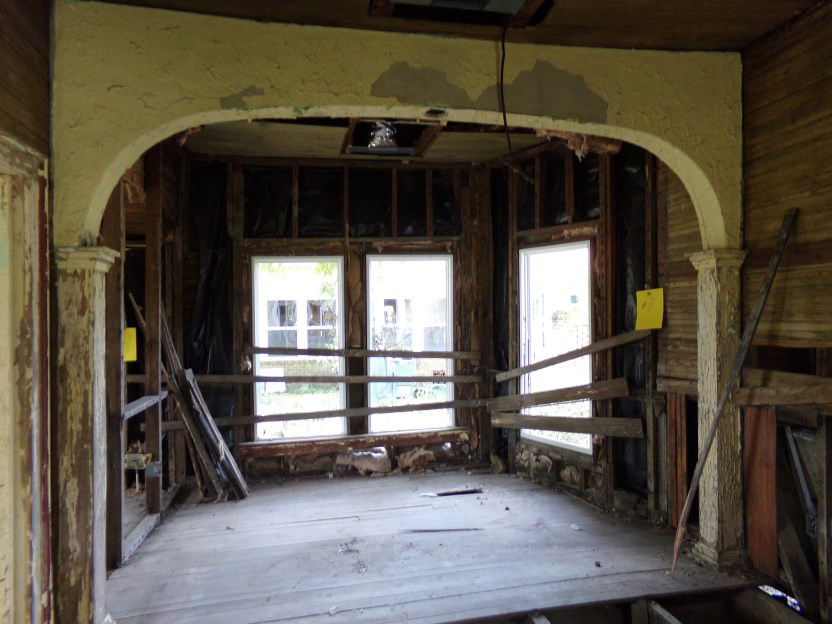 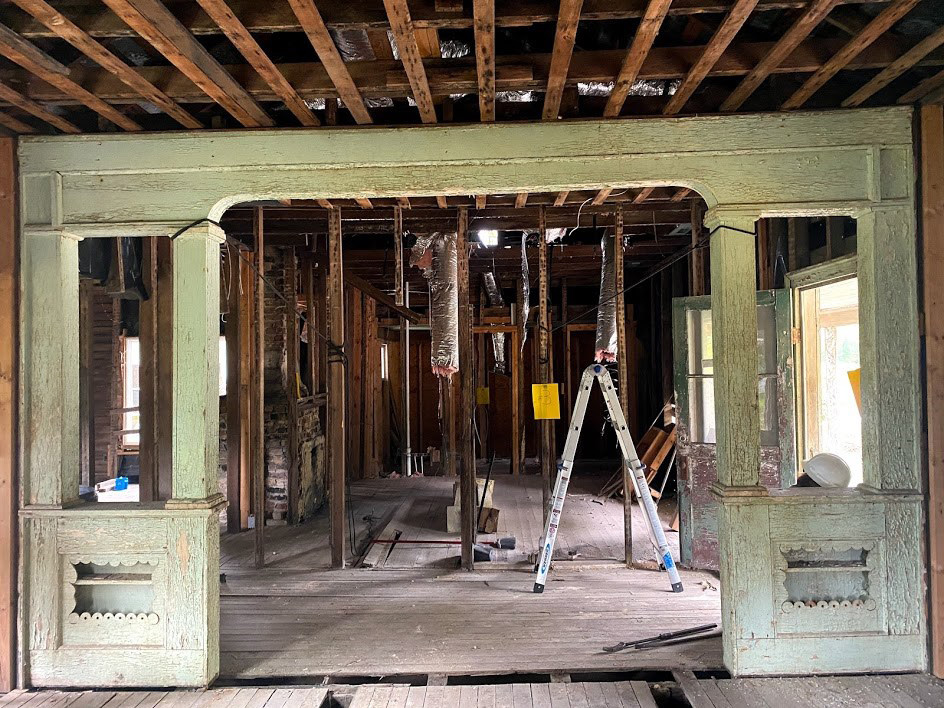 Three decorative arches were constructed inside the Matthewson House sometime during the 20th century. It is estimated between the 1920’s-1930’s before the Great Depression set in. The most elaborate archway was near the front entrance dividing the entry hall and a sitting room. The dining room archway separated the room from the hall and a small arch separated the kitchen and breakfast nook area. Each arch was constructed on site and weighed over 400lbs. Lumber predating the construction of the house was located during removal of the entryway arch. Steve Herring states “We have located some very interesting lumber which was used sometime prior to the construction of the house, and then reused as header beams above the main archway in the main entry. This material likely dates to the early to mid-1800's. It was common to reuse building materials in the late 1800's and early 1900's as there was nothing approximating a "lumber yard" as we have today. People commonly reused whatever building materials they could find from demolished properties or even from fires.” 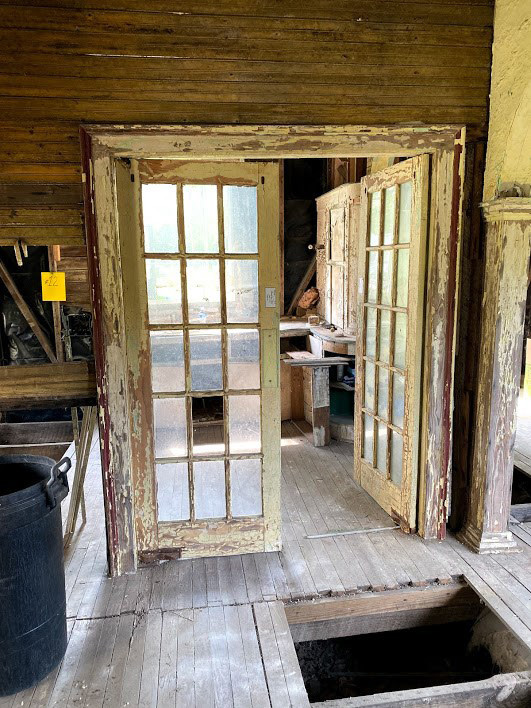 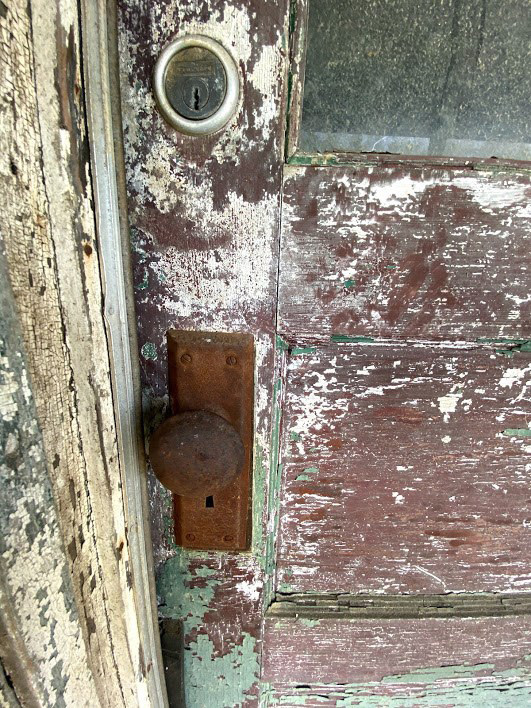 “This story is of tremendous importance to the history of Princeville, and to the larger picture of the African American experience in both North Carolina and the broader Jim Crow era South. This positions us to represent Princeville as being the emblem of African American resilience, spirit, and success.” -Steve Herring 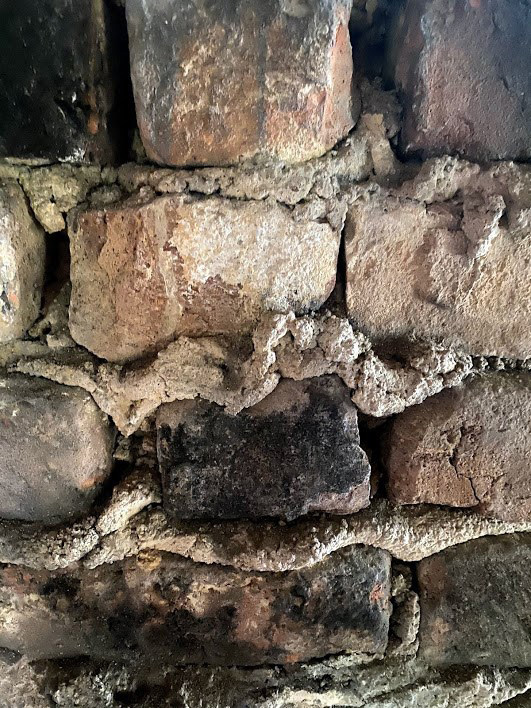 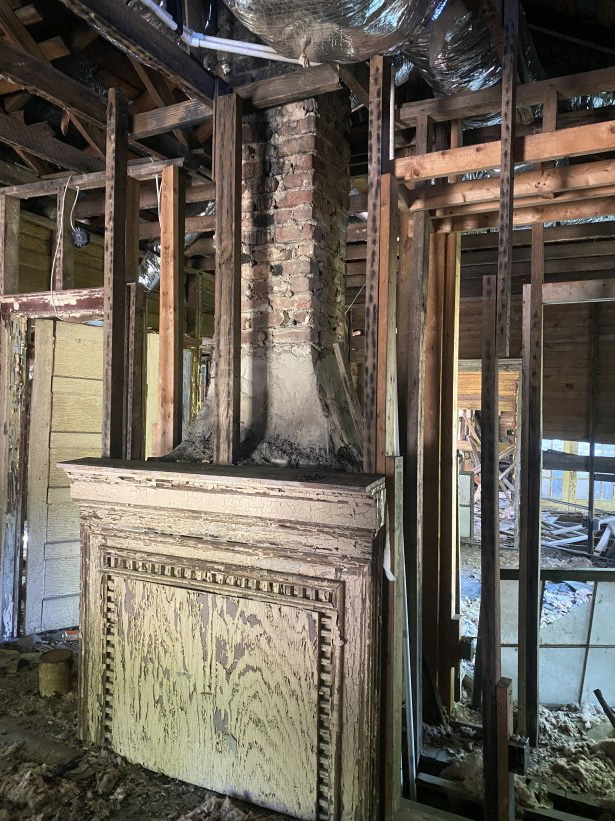 There are two brick chimneys located inside the house. One is believed to be original to the house and the other is thought to have been added when the side addition was constructed. Bricks in the original fireplace of the Matthewson property show signs of previous use. Many of the bricks are smoke stained on the external facing side which provides evidence of reuse. The age of the bricks also give way to understanding the reuse; they predate the home by several decades. The bricks have also been identified as handmade. Given the context of the area of Princeville this provides the conclusion they were likely made by enslaved people.

The mantels present inside the house at the beginning of the preservation process provide a phenomenal example of custom wood working constructed specifically for this property. It is unknown who constructed the mantels or the fireplaces inside the Matthewson House; but it is known that the Matthewson Family were extremely skillful carpenters and had the financial means to hire the best local carpenters for the job.

The mantels will be preserved, restored, and presented inside the Princeville Museum. The chimneys are unable to be relocated intact due to weight and structural issues. The hearths of each chimney have been wrapped and packed into storage. The bricks from the chimneys will be salvaged for a future museum exhibit following demolition of the property. Extensive video and photographic documentation of the chimneys and mantels have occurred.

The kitchen and breakfast nook area showcases a very unique classic Art Deco custom cabinetry popular during the 1920's or 1930's. The construction of the kitchen addition most likely occurred during the construction of the archways and the electrification of Princeville 1920's. The kitchen cabinets were custom built in place. The craftsman responsible for the cabinetry is unknown; but the quality shows it was the best of the best when it was constructed. constructed. Another unique feature that accompanied the cabinets is that the bottom several inches around the entire constructed set was filled with several inches of concrete to reinforce the flooring for support, provide an easy cleaning surface, and planned for future flooding issues. 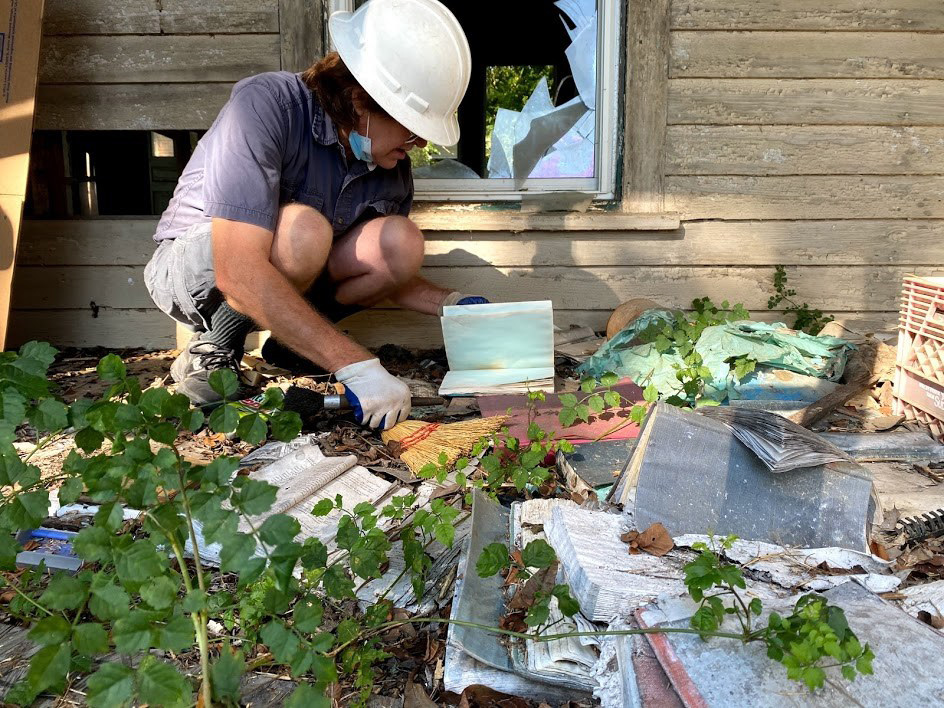 A series of college textbooks in the fields of education, law, psychology, mathematics, and science were found on the rear porch of the Matthewson Home. Although water damage is present many of the books can be preserved through conservation techniques. One of the books was signed by Glennie Matthewson, Sr. There was also a collection of primary and secondary school textbooks, mostly teacher editions. Other paper items include documents from the Town of Princeville directly following Hurricane Floyd in 1999 and college reunion programs.

The lifestyle revealed by the material recovered up to this point is both prosperous and sophisticated. -Steve Herring

The trash deposit located in the west rear of the yard revealed valuable information. Artifacts extracted from this deposit are dated between 1890 and 1930. The pit offers evidence of the regular consumption of prime cuts of meat, table china, serving dishes, patent medicines, an array of p>glass bottles, and other early 20th century consumer goods. Steve Herring states "While it is a bit premature to draw firm conclusions, I also believe I am seeing evidence of "boom and bust" cycles consistent with the surrounding social picture. The period from 1890 to about 1930 shows almost opulent prosperity, but this appears to level off later on consistent with the Great Depression." 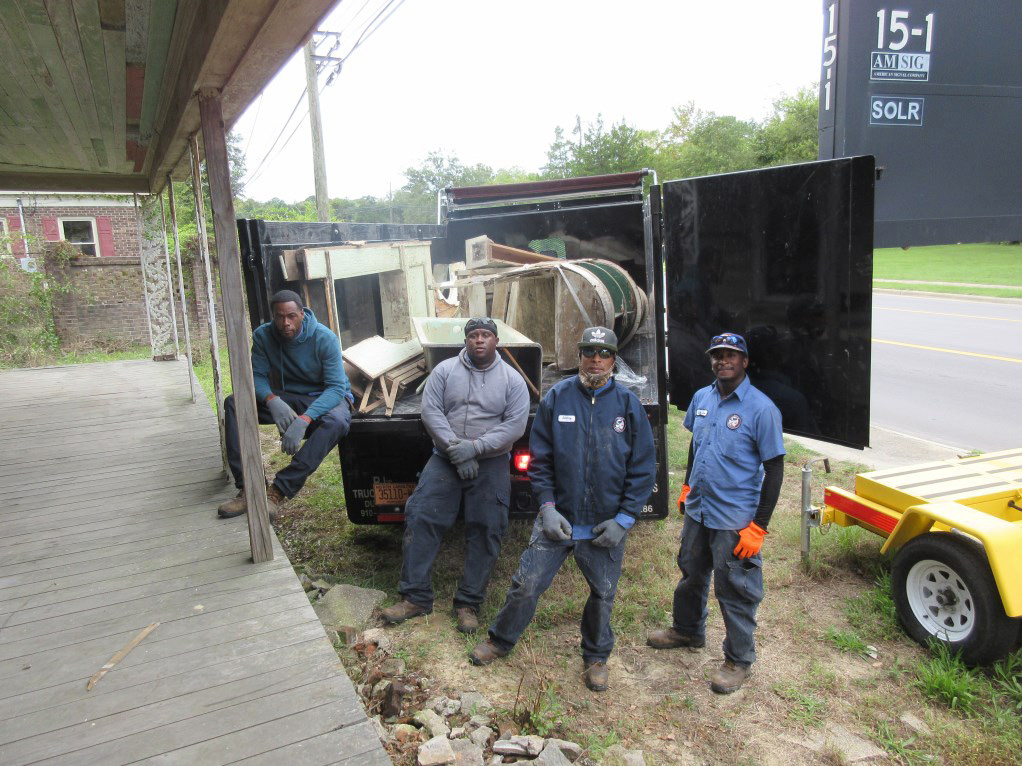 © Town of Princeville, NC. website by the computer guy & co.